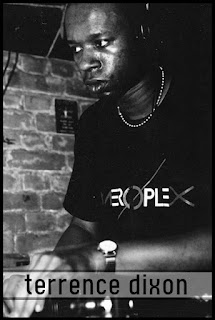 Native-Detroiter Terrence Dixon‘s longtime alliance with Godfather of Techno Juan Atkins has helped forge his own powerful sound in the world of minimal Techno. Dixon produced the two notable appearances as Population 1 on Metroplex and as Terrence Dixon on the majority of the Utensil label releases. Since his first "Live in Detroit" release in 1994 on Utensil, Dixon‘s presence has become well-established in the global Underground for having produced some of the deepest atmosphere in the genre. Significant outings in 1999 with Southern Germany‘s Background Records denote Dixon‘s broadening international horizons fanbase-wise, most recently including his production involvement in Juan Atkins‘ "Skynet" album from 1998 (Tresor 105).
In 2000, Terrence Dixon‘s exclusive album debut on Tresor entitled "From the Far Future" (March 2000) signaled the beginning of a strong new relationship between artist and label. Essentially variations of a concept, "From the Far Future" is delightfully warm with dreamlike excursions through Techno and House-based structures. Says Dixon himself, "'From The Far Future' is all about respecting those who came before me, respecting the art of pure Techno, taking bits and pieces of what's old and making it new once again." Past, Present and Future are interwoven within eleven-tracks, all compositionally unified but each able to stand alone when heard individually.
The 50-minute journey of "From the Far Future" is deep, smooth and organic; specifically designed to be flexible; understood in club settings and at home. Alternating rhythms throb to the forefront while floated in echoey synthesizer washes. Subtle traces of some of most ingenious profiles in the history of Electronic Music are hinted at, including Kraftwerk, Derrick May and Juan Atkins, bathing the listener in sensual nostalgia. Sublime. Look for the album‘s track „Running Time“ on Tresor Compilation Vol. 8 (Tresor.150).