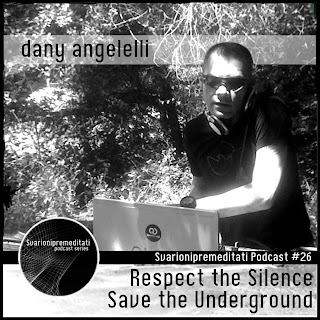 Born into a family of musicians, recording studios and musical instruments, is approaching the world of DJing in 1989 at age 13, influenced by DMC videotapes. After several years of hard work to refine his technique of mixing, is able to perform as a resident in legendary clubs in the region of Lazio, all Sundays in the afternoon, (Clemalù - Canneto - Coliseum-La Zanzara-Boca-Doing). Arriving early '90s, and with the advent of musical influences from Detroit and England, Dany participates in what might be considered the first Rave in Italy "The Magic Eyes" on Canneto - Borgo Sabotino. It is immediately fascinated by this new sound called "Techno", very different from disco-house proposal at that time, very melodic with vocals. The change is immediate, Dany still very young flies to London, home of the Sound and Rave to buy techno vinyls to play at rave in Rome.  Participate at his first rave in 1992 as a disc jockey at "Rave Chamomile". In 1993 he was resident at the "06 Disco Winter " with Lory D, representing the main importer and creator of techno and electronic scene Roman and Italian. This last, along with Leo Anibaldi and a handful of other artists, gave life and body, to the Sound of Rome. Musical and artistic movement born spontaneously as well as in Detroit and other cities were born cultural movements and subcultural.These were the artists who influenced totally Dany, outlining what is its true matrix. In 10 years Dany playing in over 200 festivals, rave parties and disco clubs. Play with major artists of the capital, remember Mauro Tannino (R.I.P.), Leo Anibaldi, Luca Cucchetti, Walter One (R.I.P.), Francesco Zappalà, Robert Armani and much more.  In the second wave of techno - Roman Movement Virus created by Freddy K. In 1999, Dany has decided to leave the public stage as no longer in line with the new sound offered by other artists. The art of DJ'ing continues without leaving the vinyl, and participates in minor parties and illegal raves, some in Austria and in Switzerland where he moved for a long time. Produced over the years numerous tracks in alternative circuits, but without any commercial purposes. Only in 2010 began collaborating with various labels in the mainstream: Submoover Records, Luminar Records and more label. In DJ sets, that Dany sees as a form of spiritual message, consisting of substrates that evolve in continuous change and progression. A trip to 360 degrees which is found in products, which are designed in different styles and genres explored and known in more than 20 years of experience.

Dany Angelelli Web Page
Published by PetroniRiot at 10:26 AM